Dad handed me one. “This is a buckeye, Janet,” he said.

I turned the object over in my hand and looked at it. Dad had taken it off of a bush that he had walked by when he’d been out hunting.

It was smooth and nut brown with one small less-than-a-dime sized space that was colored soft yellow.

Dad looked at me.

“You’ll never find a dead man with a buckeye in his pocket”, Dad continued.

I still don’t understand that but as I kept it in my purse, years later it has mellowed into a beautiful, rich luster as it hardened.

I don’ think these grow in Texas, you might just have to make the edible kind. I don’t suggest you keep it in your pocket or purse, but should you ever be traveling the roads of Arkansas in the late summer and find a pair of buckeye seeds in a fig-sized leathery pouch, keep them.

According to Ozark folklorist Vance Randolph, his own doctor, the two most successful bankers in Springfield, MO, a mayor of Kansas City and a governor of Arkansas were all buckeye carriers. The story was that hhe seeds were carried as a folk remedy to ward off rheumatism, hemorrhoids and other assorted ailments.

They are just a good way to get in touch with the folklore of nature! 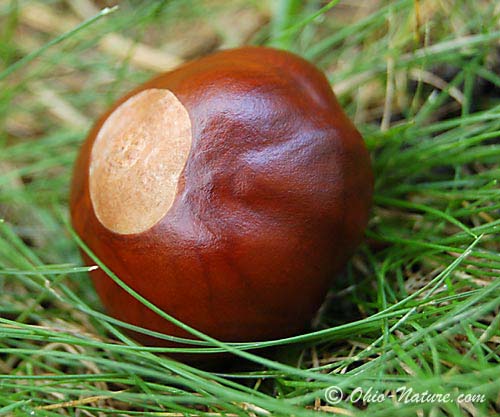