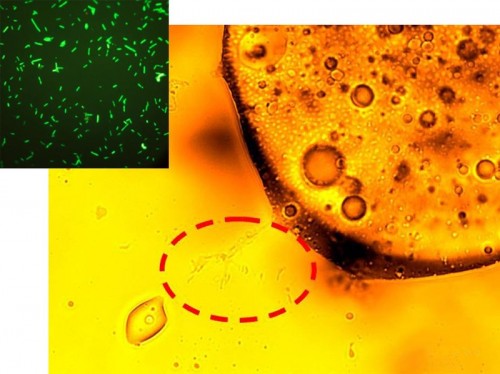 Down in the Deep Dark Gulf

Down there in the Gulf, down at the bottom, where the continental shelf gives way to a deeper, murky gulf bottom. It’s a mile down from the surface, at a place known as the Macondo and right there lays a large part of the BP oil spill.

It’s cold down there.

It’s dark down there.

And lots of scientists have been trying to figure out what is going on down there.

Because we are all worried.

We have seen oil on top of the water does. What the heck does oil that hangs around the deep, dark bottom do?

And so as science goes, the scientists are arguing about what is going on down there.

They are arguing the way scientists argue, the way we are supposed to argue: they do the experiments and take the measurements and then try and decide what the measurements are saying… and then, and this is an important then, they submit their findings to a journal (think nerd magazine).

Once it goes there, its basically like its on trial, because that paper and it’s findings go to other scientists who are supposed to know, in science terms, what you are doing, and they critique it.. review it, say no to it…

or give it a thumbs up.

So two groups of scientists taking different measurements, in different ways, and using different thinking caps have come up with the following:

It looks like down there in the deep dark gulf bottom there are bacteria, lots of them eating up the oil, just like you and I might eat up butter on a biscuit if someone told you that you could have all you want and they were happy to have you do it!

It turns out that these are special little bugs, unknown bug, bugs no one really knew were down there got real busy proliferating will all that butter… oops i mean oil, settling all around them. The little bugs down there started eating and multiplying.. and eating and multiplying.. and eating… well you get the idea…proliferating.

Now are you wondering WHY these little unknown bugs were down there? Well… about 30 – 40 million gallons of oil seep through the bottom of the gulf into the water every year, just naturally, and those little buggers are always down there eating it up whenever they can.

So the good news is that the oil is being eaten. The we-dont-know news is they don’t know how fast. The more the oil is dispersed, broken up, the faster they can do it.

One more little fact and then I am going to show you some of the little buggers.. there is a small mystery going on that is good news but a little disturbing. Normally, bugs that can eat hydrocarbons need oxygen to fuel that digestion. When the scientists measure the oxygen level in the plumes where they were sampling, guess what!? The oxygen wasn’t depleted. Which is great news for all the animals and everything that needs oxygen, but well, its a mystery…

It’s just goes to show you… the microbial world is AMAZING!

The little tiny specs in the dashed circle are the cute little oil eaters…That huge blog is a big pat of butter.. I mean oil. This picture came from Science.