In Praise of Jerga

Take for instance the utility sink that my amiga had in her Mexican home, when I was visiting last year. I had been wanting to install some kind of outdoor sink at the farm and when I spied her concrete sink, I fell in love.

I confirmed I did.

“They are very cheap,” she said and Luis, her husband shook his head in agreement and some measure of disbelief that I was so enamored with the sink.

I liked it because it was concrete. I used to watch my dad work cement, for extra money and for artistry, as a young girl. I remember the smell when the water hit the sand and concrete and his efforts as he smoothed and formed, skreeted and cured whatever he was making. I liked the pourousness and conreteness of it all. And.. just maybe, because there wasn’t likely to be another one to be found on any farm or anywhere else for that matter in my home country, so for many reasons, I coveted that Mexican lavateria.

I placed the idea out of my mind. Not much chance I was ever going to get one from Mexico City to Houston.

How was I to know that V had a plan.

Having decided to take a driving tour of southwest America, my amiga’s clan packed a lavateria into the back of their SUV, along with all their suitcases, left Mexico City and after carting it around for almost 3 weeks, arrived at the farm, con sink. I could hardly believe it.

“No Mexican housewife would have a lavadero and not also have a jerga,” she said, as she rolled the rrrr’s of the word, weaving the e into the sound. She pronounced the “j” as a “y”. The word was pretty. It rolled off her tongue.

She handed me the jerga, a cloth, blue striped and coarsely woven, only about 18 inches wide and twice as long, it short ends fraying a bit from their cut off the bolt. 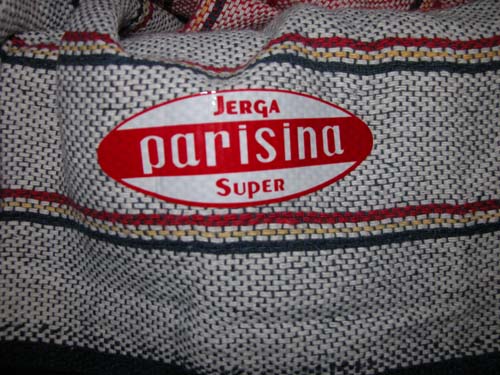 It was soft and supple and cottony.

“Mexican women use them for everything. You will like it.”

V. was more than right.

As much as the lavadero was perfect for it’s purpose, the jerga was equally so. There is something about the beauty of a useful item well made. The jerga is woven for strength and made of cotton, only cotton, because of its natural ability to absorb. Roughly woven, its texture gives strength and durability and I guess over the years there has been no sacrifice to nylon or polymers in the making of jergas.

That jerga has been used on the little back porch of the farm for wet feet when rain has sloshed around in the farm yard. You take your shoes off and wet toes sink into its little cottony fibers, comfortably.

It’s been on the seat of the old 64 Ford to protect it from dirty seat butts.

A small piece of it serves as my mop, with clear well water, when I wipe down the old pine floors of the farm house.

It’s been in the washing machine and hung out to dry three dozen times and still, its woven strength and cottony goodness, are as good as the day I got it.

I almost bought a whole bolt last week while I was in Mexico.

For those of you who like the odd, but well made utilitarian piece of art. 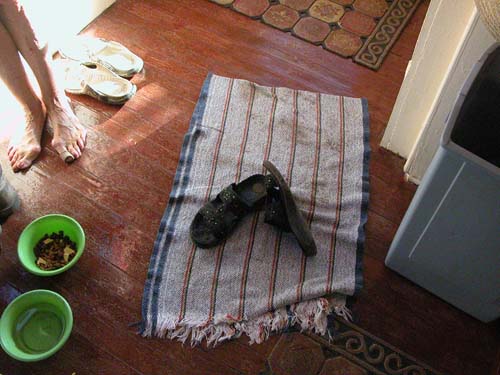