From Russia, with Love

When I get back home, I am going to watch Dr.Zhivago again. It’s probably not going to be as spectacular as I remember it. All those snowy, longing moments in the love scenes and Omar Sharf’s eyes is what I remember. There couldn’t have been much explicit sex back then, more just implication, but I sure remember just how much I fell in love with the good Doctor. That might have been when my fancy for Russian men developed, or at least the persona, since Omar, is quite obviously, well, not Russian. My next Russian infatuation was Illya Kuriakan, The Man From UNCLE, well the second man from UNCLE, currently Duckie on NCIS, all mysterious and hunky, in a cold war sort of way. And as Russia was our enemy during my youngest years, one with whom we considered bomb shelter manufacture in our back yards, its curious the romantic notions I developed of this country, defined almost solely by the movies, certainly in total by the media.

And let’s face it the media, some of it, some rumors, have set us to wondering about Russia again.

Flying over Moscow in the early afternoon, I was surprised how small the city seemed. She looked nothing like sprawling Houston, never ending Los Angeles, or the over-filled and spilling out valley of Mexico City. Thousands of Cold War housing complexes, 10 stories or so high, white stoned smudged with grime, filled my field of view. No amazing and spectacular sky line filled with buildings out of the 21st century. No swinging, industrious cranes filling the city with new life in the form of high end business real estate. Maybe they were on the other side of the plane.

The one thing I did notice. The air was beautiful. No blanket of odd colored smog laying low upon the terrain. No moisture laden film holding in car exhaust and air borne industrial waste. Just clear blue sky, the kind I have seen in high northern latitudes. I have always thought there was something special about being this much closer to the pole as opposed to the equator.

As I stood in the airport arrival lobby, the universal taxi driver plea all around me, it took over an hour for me to spot my driver. A young man, he apologized in broken English that he could not speak English. “This is my car”, he said, as we piled in.

My sons always found in interesting to notice cars whenever we traveled, especially anywhere they spotted a fine Italian or German import. It does say something about the country. There were few high end cars here, a few Lexus, but mostly low end Fords and cars with grinding transmissions, scars from multiple accidents, and more than a bit of rust. Alexy and I both knew it was going to be a long and silent ride as we drove southeast the hundred kilometers to the meeting site. There was no use in trying to talk; the best was to make less of the uncomfortable silences of two strangers in close proximity not having any way of communicating was to look at each other and smile occasionally. However, my driver had anticipated something more. “Music?” he said.

With a little nod from me, he plugged in his USB and techno filled the car. I nodded yes when he asked me in Russian, “A little louder?” For the next hour, he drove and I sat companionably, sharing his music preferences and I looked at the Russian countryside. Very tall birches, just beginning to beg off summer green lined the roads. I saw the white industrial apartment buildings up close. Interspersed with them were small, clapboard houses, their roofs wavy from time, each with carved and elaborately decorated window sashes. Pretty. No matter the road, expressway or two lane, cars dotted the shoulder. Some had people in them some didn’t. Sometimes people were outside of their cars talking, sometimes they were accessing communal water pumps and as we drove father into the country some were stopping at impromptu vendors along the road. I would find out that September is prime mushroom season and locals were combing the woods lining the roads. Alexy availed himself of one of the vendors, who was had beautiful flowers and apples. Dashing out of the car with his billfold, I looked into the yard of one of those clapboard houses. The house was more than pretty with a flock of chickens were doing chicken business in the yard. Alexy came back with flowers.

Looking more like one of the sons at 17 then either Omar or Illya, he handed me a bouquet and smiled. Thank you I said. “In English we call these asters.” “ In Russian too!” he nodded and beamed. For the hundredth time in life I felt guilty for visiting a country that I had none, not any ability to converse even in politeness with my hosts. There is something to be said about the wisdom of universal botanical nomenclature.

Alexy and I waited in the lobby of the hotel that would be my home for the next four days until the local organizer could come. The hotel is strange. I have seen this before. Careful to ensure the masses are all equal, there arose a kind of architecture and facility in communist regimes that I can only describe as some sort of weak stab at institutional grandeur. I don’t know what the truly rich and powerful of said governments indulged in but there was some kind of attempt to provide the lower elite, whatever that might mean, some measure of extravagance and the evidence was in this hotel. I knew what the rooms would look like before I ever saw mine. The problem was these were built about the same time all those apartment complexes were. The lobby with its soaring ceilings probably hadn’t changed since the day it was built. Beautiful polished marble covered several walls, stained with leaky ceiling residue. Seventy odd years of maintenance to keep things running, modernization only a dream, or maybe never one; this is what happens when a nation declines.

The clientele fit the hotel. Except for me, they were all Russian, mostly older women, humming to themselves, locked arm in arm, occasionally accompanied by a man with a walker. A doorman manned the door. He looked uninterested when we entered.

I have to admit. I am not sure where I am. Until I meet others who are here for this meeting, I am alone in the lobby of a preCold war hotel, lost in time and with few people who understand the words I speak. I am left to think on my own.

There is a certain peace here though, something I feel, that’s just short of hope but on the big side of just living today. I’m going to watch Dr. Zhivago, and perhaps, dream a little of years past and the beauty of a clear blue Russian sky, here in the fall of 2010.

Happy Monday. It’s not such a bad plan to live for today, even if you should find yourself a little lost, a little out of place, or if no one seems to understand you. Regardless of cultures, politics or plays for power, doing what you can today, whatever, wherever that is, is what counts. 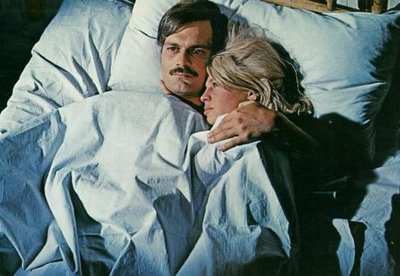