The lake was an eerie green week before last.

All that cow poop, as those black Angus mommas stood in it 24/7 to try and stay cool in a south Texas heat has produced a vast amount of fertilizer.

Within two weeks of hot summer sun and more cow poop, we had a massive algae bloom.

We moved the cows to the back pasture, where a non-stocked pond could water them, but not fast enough.

We thought about aerating the lake artificially, but not soon enough.

As the algae covered the lake, sunlight couldn’t get in.

Bacteria sitting on the bottom of the lake couldn’t do their magic. The kind of magic where inside their one called selves, little tiny miraculous, molecular machines captured electrons from sunlight sending them zinging around with so much high energy that controlled splitting of water inside their tiny little selves made it possible for them to take the H out of the H20 and use it to.. well keep on doing what they like to do.

We like ‘em to keep doing what they do, because in all that zinging and splitting and taking out the H’s, they are busy pooping out O’s.

Life in the lake counts on this. It might be bacteria waste product, but to everything else, its life.

Once that algae bloom covered the pond and the hundreds of fish were sucking that O2 in through their gills with those bottom dwelling water splitters out of business, it was only a matter of time. This weekend the first of the fish we had bought as babies and lovingly fed and nurtured in time for fish fries, started dying.

Once the algae bloom died, things got worse.

The algae started sinking as they died and other little bacteria, hungry for dead algae bodies, started taking them apart.

Decomposing all those little algae parts sucked the last bit of oxygen out of the water.

Night time came, water splitting stopped. All through the night the fish sucked up what they could, eventually coming to the surface as a last resort, just before the sun came up over the rise. We saw them. Two pound catfish raking the meniscus between air and lake water, gasping. Their whiskers moved the surface scum around and we looked on, feeling like bad farm managers.

We didn’t do exactly right. Not with malice, mostly from ignorance with a big splash of apathy. Indeed, we weren’t good managers. Not because of the ignorance, but more because of the apathy.

Sometimes, the more things we do to make life easy, the less self sufficient we allow ourselves to become, the more we fail to realize that life can never be taken for granted and that apathy rarely gets you anywhere. It’s a bad frame of mind to get into.

It took a hundred farm raised pan fish floating upon the shores of our little lake to make the point.

It’s a good thing God gave us minds to learn from our mistakes and a natural world robust enough to forgive them. That and Bon apetite, vultures and crows. 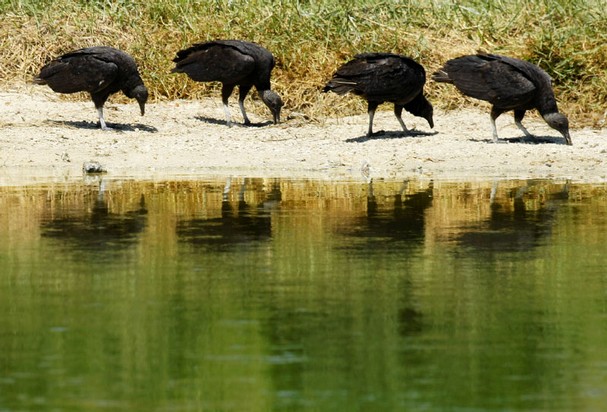