Near Troy, Missouri and the junction of state roads V and W and JJ, there are a series of low rolling mountain ridges. These ridges stand only about a handful of miles from the mighty Mississippi and being high, they escape when that great river swells. Roads, paved and unpaved meander through and across their valleys and I guess the crazy road structure is typical of need. Need for access as various settlers did and do build isolated homes or pull double wides through the brambles to well, settle.

We had pulled past the old man’s garden several times. Not far off the dusty road, his trailer was old and it didn’t look to have much female attention and my plan was to ask about his garlic. He gives it away to his neighbors. We knew that because staying at a said neighbors house, we had tried it. The bulbs were full and firm, with strong white roots clinging to a little bit of his garden dirt and when we roasted them, they were divine. Yes, divine.

The last afternoon of our mountain visit, the sun just beginning to start it’s journey past the west horizon, driving past the old man’s place one more time, there he was, out in the heat, tending his garden.

“You still want some?” Jim asked. “I’m sure he will be happy to give you some.”

“Yes, but tell him we would like to buy it,” I said thinking its one thing for someone to offer the toils of your labor. It’s an entirely something else to ask for them.

Normally gregarious and usually lead in adventures like this, I asked Silent Bob to take my place with Jim. Judy and I watched from the dark windows, air conditioned air blowing max as we watched our two men approach the old man.

The old man was neither tall nor short. He was wiry and brown, like bacon left a little too long in the oven. He wore blue denim overalls and over the top of them he had a ragged workshirt. A thick leather belt circled his waist, sort of up high between his navel and nipples, on the outside of his shirt. Wet with sweat and unbuttoned, the shirt covered his arms to the wrists. His straw hat covered his eyes. He was a talker. We watched from inside the car, the mime of conversation and where my observation left me unsure of the dialogue, Silent Bob filled in later as we lay in bed.

Jim asked the old man if had any garlic he was willing to part with. Looking up from under the floppy straw hat, he looked Silent Bob over and decided he was okay, being with Neighbor Jim and all. Silent Bob offered money.

“No, but I have some I can give you. If I sell it, then it is work,” he said, his face friendly and welcoming.

His hoeing in the August sun revealed big red tomatoes, on the vines in the front, and a row of okra in the back. Several borderline “too big” and tough okra has been culled.

The old man leaned on his hoe, excited to have someone to talk to. Payment can come in all forms.

“I asked that old widow down the road if she wanted to pick that okra you’re looking at, but I guess she didn’t want to get hot out here.” the old man stated, his face registering the worth of fresh okra given freely.

I watched as Silent Bob and Neighbor Jim followed the old man to the back of the trailer. The old man limped, a strange giddyup in his walk, like one side of his bacon strip body had shrunk up more than the other side.

Once in the shed, there were five large bundles of fresh garlic hanging at a low eve, wrapped with red striped twine. “I knew your Mother would be happy with even a part of one of those bundles, Janet. They were really pretty,” Silent Bob said, revealing more than just words for my mother. “He told us about refusing another neighbor some of that garlic. Guess he’s more discriminating about who gets the toil from his labor.”

Laying their next to Silent Bob, I thought about that.

“That garlic wasn’t even 6 feet off the ground in that shed and either Jim or I could have reached the string easily, but that wasn’t how it was going to happen. That old man limped over to an old closed in shed, moved a 5 gallon bucket of oil and opened the doors. I wasn’t sure what he was doing. He moved a bunch of stuff, rolled out a lawn mower and then pulled out a rickety old ladder. Jim and I cleared a path under and around the garlic so he could set it up and precariously balance on the bottom rung.” He pulled a whole bundle, “Here, take this, this is a small bunch. You say you live in Texas?”

Reaching into a 5 gallon bucket of garlic seeds, he rummaged around until he found a Wal-Mart sack and filled it with seeds. “Plant these 3 inches apart, they say to space them 2 inches, but I prefer three. I plant them an inch and a half deep. They take a while to come up, keep them wet. Up here we plant them in September and start digging them in June. They take about 9 months. You dig them like potatoes, you know?”

Silent Bob watched and moved obstructions out of the way as the ladder was replaced in the shed and all the “stuff” was replaced where it belonged.

“My buddy and I got drafted in World War Two,” the old man started. “We just got out of high school, and we weren’t going to enlist, but if they drafted us we would go. I had a choice between Army, Navy or Marines, and I picked Navy. After boot camp I got assigned to school to be a Medic.” His voice steady he continued. “They were forming a new Marine Division and they needed Medics. So I was a Navy Medic with the Fleet Marines. We went to Guadalcanal towards the end and got sent into Guam. I got wounded pretty bad, they sent me back to Hawaii, and after a couple months there I got sent back to my unit in time to land on Iwo Jima. We had 45 Medics in our Battalion, only 13 of us when it was over. I got a few scratches, once a piece of shrapnel as big as a sawblade hit me in the shoulder. I was pretty lucky, it hit flat. When I go to the doctor’s now they were looking all over for cancer. They always tell me that area looks dirty.”

“I wanted to thank him for his service, Janet,” Silent Bob said, a soft silence envelops us and he continues.

“I guess some is still in there. I am glad I went into the Navy, I would never have seen a lot of things I got to see,” the old man said.

“I know from my history, the places he was when he was there were not places where you saw many things that were pleasant,” Silent Bob tells me, into the dark.

“What kind of car is that?” the old man asked, whether for curiosity or just for continued company. “Our wives are in there,” I said and told him the story of how I got it from my brother. “You know when I got back from the war I worked in a body shop, I retired managing a shop in 83.”

A shuffling of feet and a silent agreement between the three men that the price for hand grown garlic was set, and the mechanic-ing story left for another time and after just one more round of thank yous, and repeated instruction, Silent Bob and Neighbor Jim headed for the car. They called over their shoulder, “It is awful hot, maybe you should take a break.”

“Going to do that right now,” as he lowered his bacon self into a seat, shrapnel and dirty cells all.

I laid in my bed that night and thanked God for hands and hearts such as that old mans. And for the right payment for garlic brought to Texas. And for small seeds of garlic or freedom or good intentions sewn wherever they fall.

And for you my Josh, as you wing your way to Iraq, with your soldier’s heart and hands.

God Speed to you and all your comrades in arms. 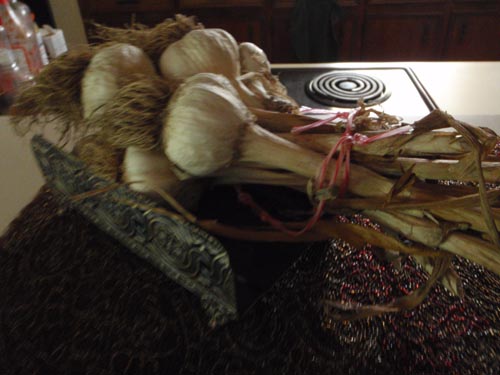