Hymie, the Tree and Muscle Man

We’ve got a lot of pine trees on the farm. Very old ones. I’ve talked about them before. The barn and ‘D’ house all sit amongst them. They tower into the sky more than 60 feet and when the wind blows up from the south, which it does a lot for some reason, they bend and sway a remarkable amount. Song birds and woodpeckers and big ole crows gad about the top most branches.

But in the way of nature, things live and things die and one of our big old pine trees succumbed this spring. I could swear it had been green this time last year, but about May massive amounts of bark and limbs began to fall earthward and it was clear that the least of the big old pine’s problems was a massive infestation of pine bark beetles.

Nestled as it was behind the barn, every weekend I have been terrified to come to the farm and see the thing laying across our barn, or across the chicken and turkey coop (I could imagine feathers still flying as the it hit), or worse yet, laying across something of one of our neighbors. (Yeah, when I say this thing is nestled I mean nestled.) 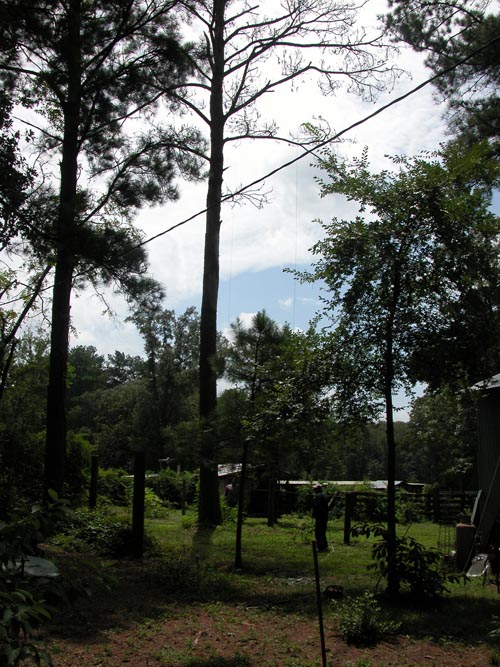 He showed up, two helpers in tow, with a pickup full of azure ropes and chainsaws, took one look at the pine and said, “This thing didn’t just die.”

“Will you be able to do it”, I said. “Of course,” he answered and he strapped on his climbers, got his safety harness in place, and in the heat of a Texas July sun, he started climbing.

We had talked about the electric wire and my fruit trees and the muscadine vines I have been nurturing since January. I told him it was more important to me to have the tree down. He smiled. 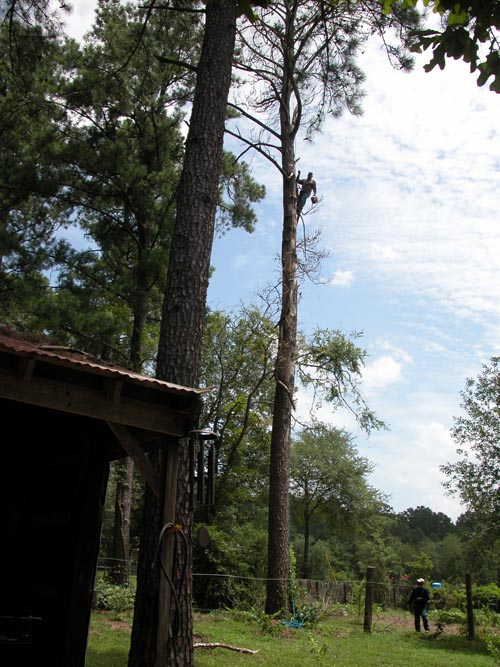 Half way up the tree, he got a cell phone call, and with chainsaw in idle behind his butt on a carbiner, I heard him answer his phone and then laugh.

Meanwhile, I was praying, something between let him be safe and thank you God that you didn’t give me this job.

Higher he went. When he got to the fork, with about 20 feet from the top, with one hand he unlatched his chainsaw and swung in rhythm to begin his cut. The strong blue rope tied to the top, his helpers tugged towards the row of my garden where the tomatoes had been. He moved them a bit with the wave his hand, just to the left of my still producing peppers and down came her crown of dried and brittle branches. 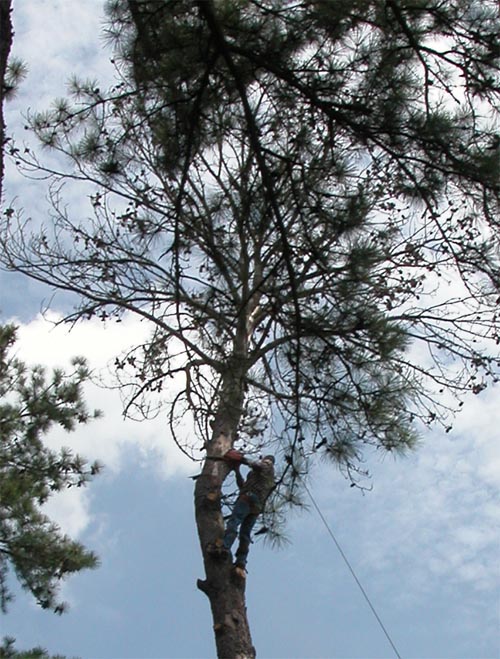 He waved from the flat topped pine, her cones all gone and spread around my garden soil. 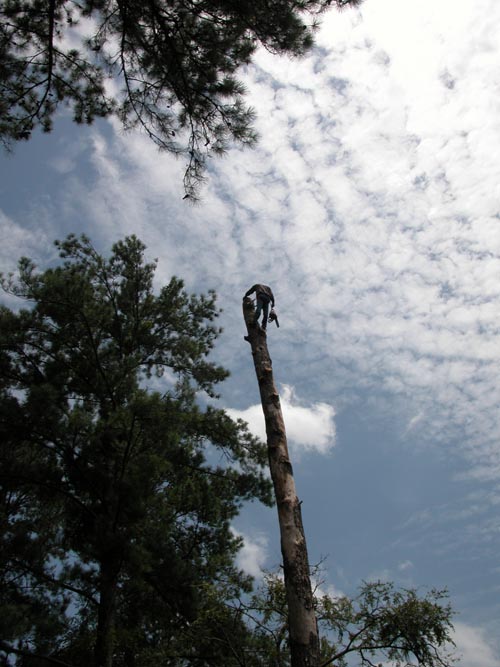 The second section on the ground, he tied his blue rope around the top of pine pole, and walking gingerly down, his spikes with little purchase on the slick, barkless tree, he called to his men. He cut the wedge out of the side, and coming around began the cut that would meet and topple the last of her. With a thunderous shake, she fell, nestled right up to my row of okra. 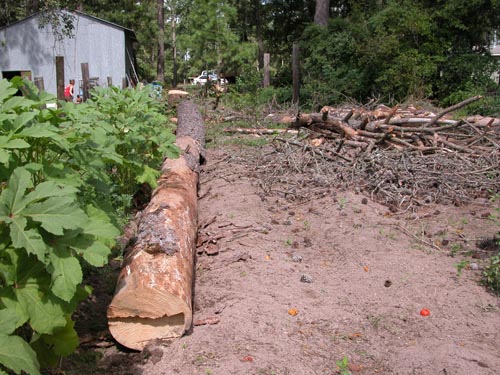 “You want some water and ice?” I said.

We all sat around the little picnic table, shaded by the other pines as old as that one he had just cut, drinking fresh, cool water. The dangerous job successfully over and in the sharing, made us friends of a sort.

“I do human bones and muscles, too,” said Hymie.

Coming around with one brown hand, dusty from pine chips, he pushed hard at the base of my neck where it meets my shoulder.

“Here’s my card. If you have any more trees. Or I can fix your bones or muscles. Yours too Bob”, said Hymie.

You never know what kind of multitalents are hidden in Hempstead but tonight, my shoulder, as I lay down, despite the work of carrying that gargantuan down to her resting and rotting place behinds the dam, my shoulder relaxes into my pillow, my sinews and muscles, soothed. And my brow a little less worried that when the wind blows at my old farm, the strong pines left, will bend and not bow nor break, at least for now.