Who is Willie Nelson?

I remember the first time I heard Willie. He was singing Stardust. Unusual cadence in the way he sung the words, I liked it. Since he’s gotten older, I haven’t listened to him much, just looked at pictures of his face.

I’m a bit partial to brown eyed men, but there is something about Willie’s that make me sad. I think its because they look just like my Aunt Dovie who had  the life most of those old drinking songs Willie has sung and made his living are about. Her life was a bad one.

He’s been in the news lately. It’s July the 4th, and Willie’s own brand of Woodstock is around the corner down in Austin. He’s got a new alblum out, Country Music. I heartell its hauntingly beautiful. I am going to give it a try.

But I guess the thing I am thinking about today, is that Willie and I have something in common. He’s getting old. He lost a son. And he has had to come to terms with what’s after this.

“Death is not the ending of anything. I believe all of us are only energy that becomes matter. When the matter goes away, the energy still exists. You can’t destroy it. It never dies. We are never alone. Death is just a door opening to somehwere else. Someday we’ll know what that door opens to. I believe that. I really do,” said Willie, the other day to the Parade Magazine.

For me, he didn’t use the right word, but it 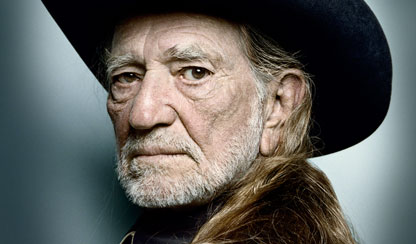 s there all the same.