We sat there, Fariq and I, gazing out on the pyramids. “I don’ think an Egyptian made them.” He said. His eyes were like dark holes in the night. The Sahara wind blew across the balcony we sat on. His hands and vision had shaped this little corner of his family’s flat, twelve stories up, with little to obscure his view to the colossal monuments to immortality erected 5,000 years ago. I sipped the hazelnut coffee he had made. He and I sit Persian style. We are comfortable despite the constant minute blasting of sand particles that blend everything in Cairo to tan, including my freckles.

“I watch those specials on Discovery that try to explain how they moved the huge stones in place.” His English is near perfect. Like most Egyptian men, he is thin, with swarthy skin. He continues. “They say that they built sand ramps as they moved up the sides. Do you have any idea how long those sand ramps would have had to be to accommodate the inclines needed to reach the ever taller sides. Past where we are. Its not a good explanation.”

By now, the wedding that has been taking place below us and a few blocks over is at its peak. I can see the women dancing and talking, in their narrow alley. The men are separated, celebrating, one block over. They all sound happy. I sip my coffee. I can see the sphinx as the nightly light show colors him green against the back drop of the pyramids of Giza. My men, Josh and John are inside Fariq’s flat. The shisha pipe is in use. I think for a minute about who I am and where I am. The only other females in this flat are the cook and the maid. They have not sat and shared mint tea and small brown pieces of moist cake. They are not sitting and talking. They are whisking dishes and trays away and being quiet.

“Do you believe there is life elsewhere, on other planets, Janet.” He says my name with the certain mixing of vowels and consonants that make words soft and gentle that all Egyptian men seem to be able to do. I have not talked at length with many Egyptian women. “I do not think that Egyptians made those pyramids,” Fariq says once again. For a minute I think about how strange this conversation is.

I am Christian. He is Muslim. I am devout. He is not. I am a woman, an American. He is a man, an Egyptian. I am a scientist. He has mentioned that he worked for some time in Saudi and returned to his homeland. He is seriously questioning. I answer.

“Fariq, think of what you, one man has accomplished.” He had shown me around his flat. Like most developing countries, the more unfinished a building appears, the less taxes one must play and the building his flat resides in belies the beauty that Fariq has created with stone and marble and tile, largely with his own hands, 12 stories up. The rooms are large and opulent, inviting. “When hundreds of thousands of human hands and minds are set about a task, I believe that what might seem unimaginable can be accomplished.” I say.

He is not deterred. “Would you believe me if I tell you I have seen things I cannot explain as I have sat on this balcony? Do you believe me?”

“I do not know if I believe there is a God,” he says finally. “I have thought a lot about that.” He looks directly at me.

“The creator of strong minds and of this world and of any other worlds out there is not afraid or surprised that you wonder that,” I answer as we both turn our gazes to the stars that twinkle above the pyramids. “You are not the first or last to wonder this. It speaks of a certain bravery and curiosity and attention to thinking about what matters. God made us knowing that we would wonder these things. It’s those who ignore the questions as if they don’t matter that surprise me.” To myself, I consider that the human soul has and always will seek to understand its master or be less for not doing so.

“Have you?” he says. “Yes,” I say. “There are lots of things in this world beyond my understanding but one thing, I believe there is a God. Our Father in heaven, He loves us, He has proven it.” “You are speaking of the Christ.” He says in statement. “What man could give up his son for people who do not deserve it? And ask for no payment?” I say.

It’s then I realize something. It’s in my mind that Christ was here, somewhere in this giant sprawling city, when the city wasn’t this big city, a time when the Nile ran fertile and Christ’s little small two year old feet padded around, safe from the dangers of Herod in Israel. Christ too looked up at the pyramids. To my way of understanding how this life works, Christ knew one day I would sit here with Fatiq and we would consider Him and aliens and life.

Fariq doesn’t say anything for a bit. It is a pleasant silence. “So do you believe Egyptians built those pyramids,” he questions me once again. “Yes.” I say. And I think but don’t say how much I know men, and women, have desired immortality. That desire is at a heart to understand our existence and God’s place in it and I maybe even the role that intelligent life on another planet might play.

Ashraf joins us on the balcony. Since my last visit to Cairo, he became my friend and this is his family that he has made me a part of this last night in Egypt. “Fariq, tell Janet of your farm.’ And for the next several minutes, the beauty of Fariq’s here and now, his farm, makes him very happy. “You must come back and visit my farm. I have the fastest horse around Giza. She is beautiful. I will let you drink water buffalo milk. It is not yellow like cow’s milk. I go there, Ashraf too, because it is peaceful. We work, we drink tea, smoke shisha.” I think about my farm, my refuge. “And you must come to my farm, I tell him.” “In sha allah,” we both offer.

As we pile into Ashraf’s car and head through Cairo, the language of car horns an intimate part of life in this desert city, doesn’t distract me as I sit in the back seat. It’s early morning and my sons are ready to be home and so am I. We pass by the roadside cafeteria where Ashraf had taken us for dinner. “The locals eat here.” He had said. “They have over 300 items on their menu.” They had brought our order to our car. It was an Arabic sonic, but better.

“What were you and Fariq talking about,” Ashraf says softly. “Same thing you and I have talked about.”

“He didn’t convince you that aliens built the pyramids?” Ashraf was smiling.

“No.” Did you convince him that Christ is the Savior.” “I hope so.”

“Yes, it is. He is good. And you, my friend, my Arabian brother, are too. Thank you for this night.”

“You are welcome, Janet.” He says with that soft and gentle Arabic mixing of vowels and consonants. 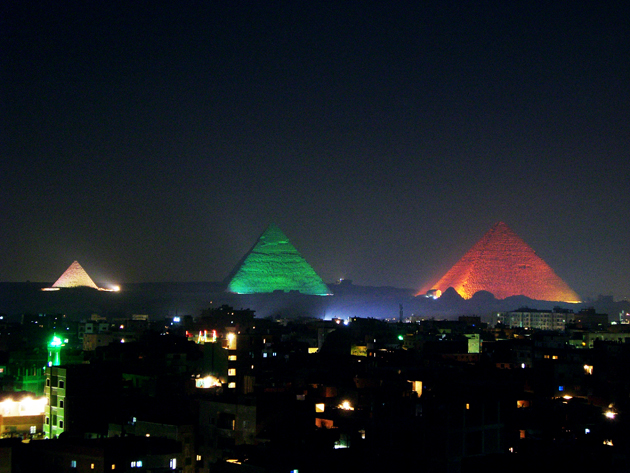