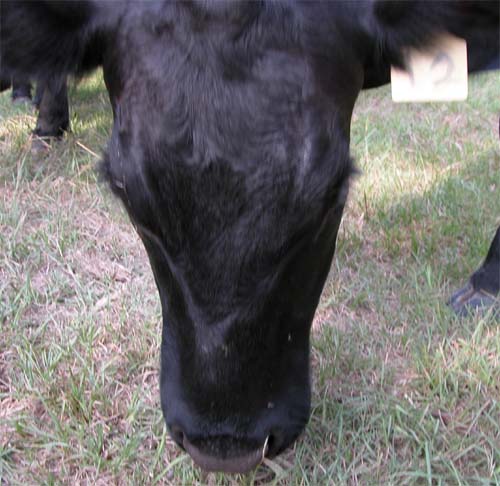 We sort of all fell in love with #12. Big and with a little bit more testosterone floating around in her big black body than necessary if you are a double X, she is a cow with attitude. Just one of those animals when you see her, she’s special. When I went to cowgirl school in the summer, they told us to look for feminine features when you picked your new cows. Silent Bob and Brother Neil refused to admit she looks kind of bullish in the face. They love her that much. But she does, look bullish that is. Broad and tall, a little reddish pelt along her backbone just above her ribeyes, muscled up in just the right places, she can handle whatever comes her way. And she does. Well until we took her calf away.

One thing was clear from the beginning about #12. She was imposing, not just in look, but in demeanor. From the first day she came, just as a visitor then, she established where she fit in the herd pecking order. I don’t know exactly how cows accomplish that, but establish it #12 did and within 30 minutes of her arrival, she was it; the alpha female. It was her that would shove that big body of hers to stick her nose in the unopened sack of ranch cubes, the other cows glancing off her shiny hide as she manhandled her way from wherever she was to the head of the line. She might not let you pet her, but she was going to be the first one to stick her nose in that bag of green pellets no matter how close to your body you carried them. The rest of the herd just backed off, not a one of them willing to challenge her. She would stand, happily munching, her pretty cowlick topped face, slightly masculine, looking serene and confident of her place in the world. Turning her head to look at me, she almost always issued a great big grassy, cubey belch from between her cow lips. “That’s how it is, sister,” her eyes said to me.

All through the summer we watched her get even bigger, because you see right inside that big body of hers, #12 carried the cutest little bull calf, up until about July. She dropped him in the middle field and well, just like everything she does, she was the best mother I ever saw. He was big boned and long legged, just like his Mother, he looked promising to me. Although hers was the last summer calf, it was she that designated the nursery area each day, peace reigning over the little calves and cows, as they nursed and momma cows mooed ever so gently, soothingly to the new babies. I watched her all through the summer and of all our cows, she was the one that every minute knew where her baby was. Her constant reassuring low moan, the one she mooed just for him, echoing to find its mark, in his little baby bull ears. For #12, whatever instinct she harbored in the mix of cow genes that made her distinctly her, she made sure about him, all the time.

What I am about to tell you has something to do with understanding the intersection of instinct and intellect. I have no idea how these work together in human mothers, I just know they do, so I have less idea how they work together in cows, I’ll leave it to you to decide how far we might be able to go with the analogy of human and cow mothers or how smart cows can get, but I am going to tell you, in the world of cows, #12 is up there. So when she left in the fall, back to her real home, she was compliant and happy, her little boy calf with her, all was right with the world, because if you’re a cow no matter how smart you might be, the grass is always greener on the other side of anybody’s fence and its all good with the cutest little boy calf at your udder.

“I think we should buy #12,” said Silent Bob, when the grass had browned and we knew she had probably been with a bull. “We can’t use her bull calf. She will get here, to the farm, pregnant. Maybe she will throw a female this time.” And as simple as that, #12’s fate was sealed and being smart and with instinct on your side mattered none in this case. One of those handsome cowboy types brought her back and when he pulled into the drive, I heard her in the back. He pulled through the front gate pasture and opening the trailer door, she charged out, frantic. Steam from her sweaty black hide glistened in the afternoon sun. If she could have frothed at the mouth, she would have. The rest of the herd was corralled and after a quick run through of shots, we hoped she would settle down, as the others joined her in the front field. Herding animals like to be part of a herd. They took one look at her and moved out and across the dam and away.

The big easy, confident way about her was gone. She couldn’t find her baby. Her full udders swaying heavy and pendulous, she called him. She loped the entire fence around the front pasture and then began again. Within an hour she knew he wasn’t there. Somehow, beyond me how, she realized the gate she had come through that brought her to this place without her calf, and standing back, a quarter of a football length away, she charged that gate, running as hard as she could. Four more times and she knew it was hopeless. She moved to the corral. She mooed his special moos. When she left here this is where she and her baby had been loaded on the truck. She circled in and around and finding a place where the barbed wire hung a bit tattered, she charged. She mooed on the other side, having broke through. As we coaxed her back and knowing that not much barbed wire fencing would hold her in now, we decided. We penned her up in the smallest corral where thick wood boards showed little to a cow but just glimpses of pasture beyond. She mooed for him all that night. “She’s too smart for a cow,” I thought to myself.

It took her four days to settle down. I fed her choice hay when she would finally eat and enticed her with cubes and finally even the rest of the herd thought it safe to venture close. As we let her out, she ambled off, taking up her familiar position, and as she turned her head, I saw the deep brown eyes of that mother cow. She mooed softly, that moo that was her calf’s and turned her head and moved on.

I told you. I don’t know about intellect and instinct and how that works in God’s animal kingdom but I do know that when it comes to mothering, no matter the mother’s place on evolution’s ladder or God’s plan of dominion, we Mothers, we are all connected. Me and #12, we are cowgirls, and while we accept the hand we are dealt, in whatever way our respective brains might do so, when she comes to the fence, and I have a pail of cubes, and she acts like her greedy alpha self, its me that notices, that she always, with one little swing of her head back, eye to eye, moos, very softly, for him. And I say to her, “I know, me too.”

Bible verse of the day: Trust in the Lord with all your heart and lean not unto your own understanding. In all your ways acknowledge Him and He shall direct your paths. Proverbs 3: 5-6

Quote of the day: Cows are amongst the gentlest of breathing creatures; none show more passionate tenderness to their young when deprived of them; and, in short, I am not ashamed to profess a deep love for these quiet creatures. Thomas De Quincey