Funny how the date of important things get blurred in your mind. You say to yourself I will never forget this day and then, there you go, forgetting the exact moment or day or year, that marked an event in your life that was life changing or earth shattering or at the minimum, significantly changed your mind, your heart or your soul. Perhaps it’s not that specific point in time that you promise yourself you will never forget that gets blurred so much as it is that important things rarely distill into one perfect moment in time, but almost always are more about the process that took you to get there and a lot of times where it took you afterwards.

So it seems to me, when I was just barely a teen, we started getting Scientific American’s at our house, I started finding the need to write, my Dad quit drinking for good, (albeit one day at a time,) and Dad ridded himself of his old mangled, wrecked-multiple-times-while-drunk pickup and brought a brand new 1964 Ford F-100.

A new vehicle in our family was big business. I don’t recall Dad talking much to me about the purchase. What I gleaned came more from his actions and facts overheard. I know that he and Mother paid cash and that his best friend thought Chevies were better. I knew that Dad kept a fifth of whiskey in the zippered pocket, driver’s side door, for most of the time he owned that truck and that, while it worried my mother crazy, the fact of it being there provided a sense of security for him. Big on discipline and not the excuse of opportunity, the fifth was a continual reminder that Dad chose not to drink that day, due solely to a power much mightier than he. A power, the only power able and willing to still Dad’s hand from that pocket. I knew he was proud of that truck, despite his conviction that humility was probably closer to Godliness than cleanliness, and I never got the impression that God made him suffer for that concession to vanity. He loved that truck and he and I, among others of those he held close to his heart, partnered with him on hunting and fishing and camping expeditions, bottoms planted firmly or squashed together, on that red bench seat.

On long drives home from our excursions, Dad was pensive, I didn’t always know what he was thinking about, but the tell tale sign of thoughtful moods was detailed in a particular habit of how he drove his truck. A small man, no pot belly, once that big V-8 was roaring down the road, and there was no need to implement clutching, he would prop his left foot up near the dash board. I guess he needed to relax the joints, having positioned himself for hours in a hunters walk or stance or skulling the head of a john boat. Whatever the reason, he kept his right foot on the accelerator and that truck, engine purring, powerful as its manifold contained a million small gas combustions, Dad and the 64 took us home, he all the while deep in thought. (This despite his children’s growling tummies and the neon invitation of hamburgers and fries, which he never seemed to notice. He just drove and thought.)

I guess you could call that truck a one-owner truck if you want to categorize things by family, because after my dad died, Brother Neil took it over and on, to California and then back eastward again, as his family started, then grew. With an engine that metered over 150,000 miles by then, it was Neil whose foot rested on that old accelerator pedal and felt the power and whine through Arizona desert and west Texas plains. And although I never knew Neil to hike his leg to drape next to the steering column, like father like son, I know in my heart, he too entertained thoughts that centered around consideration of the meaning of life and the dreams he had for it, while he drove home to Texas, behind the wheel of that old 64.

It happened again, that constant culminating of events that guides us in the decisions we make, and the places in our lives we go and there you have it, Neil gifted that ole’64 to Jake, who drove it and minorly wrecked it at least once that I recall, during his teen years. Jake would grow to favor my Dad in looks and in the same little piece of genetics that he had from him somewhere buried in those genes or perhaps the growing up he had from his momma, he loved that truck just like his grandfather did. What you have to appreciate is that by this time that truck was, well, out dated. Without power steering or braking, it was the devil to drive. And although I know little to nothing about automobiles, the thing was heavy, really heavy, it’s 30-something year old suspension rocking and creaking and laboring under the heavy gauge steel of its body. Sporting big heavy, chromed bumpers, it was a tank compared to current cars and although the engine was old and made prior to the time of catalytic converters, there was not much else under the hood but it, it continued to gen out horsepower, yet sufficient to move it along at a respectable 60. This despite the fact its odometer had now gone past the100,000 mile mark twice.

The old 64 would sit, it’s tires deflating, its brakes rusting solid to its drums in our garage, until Jake, dreaming soldiers dreams in Iraq, would request that the generous heart and talented hands of his uncle restore it to drivability for Jake’s return home. Strange enough, Neil had it readied, a new suspension, new upholstery so much like it looked when my Dad bought it, a shifter in the floor where the three in the tree once goverened, when the 64 came home to Houston, ready for Jake, the week he left for Colorado. It was in God’s plan that Jake never drove that truck.

I drove it a bit, during the last 4 years and it was me that manhandled it to the protection of our run in barn on that little piece of land God saw fit to let us tend. I never saw Jake drape his leg over the column, but I had seen him mirror Neil’s grace behind that oversized steering wheel. So difficult to turn and handle, both of their upper body strength similar, Neil and Jake knew how to position themselves at just the right angle that made turning and steering that ole 64 fun to watch. Not so much me. There was an ease and grace and confidence to their driving. I thought about that and smiled. I thought about all the memories held in this small red upholstered cab over 45 years. And it was then I remembered a Scientific American story that Dad had read and having read it, insisted I do so, the article published back when the truck was brand new. Dad and I had talked about it. A psychologist, a guy named Harlow, in the 50s and 60s, devised experiments to understand the results of monkeys deprived of a mother’s love or the society of friends. In non-psychiatric words like love and pits of despair, Harlow detailed the results of his experiments and the irrevocable changes that occurred in the infant monkeys. The article made an impression on Dad. His childhood, while not quite at the level of Harlow’s experiments, was nonetheless hard, moderately cruel, and largely devoid of love and rather than pass those things on, he chose to pass on something different.

“Mom, I think I will take the ‘64 to Killeen,” Josh told me last week. “Its cool out now and it will be fun to drive it.” I smiled to myself. “Call me when you get there.” When he reported there was a sense of excitement in his voice. “Mom”, he said, “ that ole truck is amazing. Once I got on the road, I kept it at about 60, my foot on the accelerator, it never missed a beat.”

My life, with its own raw moments and losses has and is largely about love. When it’s all said and done, I am the lucky one. In a culmination of events, over 45 years, eloquently represented by the lives of those who have placed their foot on the peddle of that old 64 Ford, I have loved and been loved and will love.

Do the same this Happy Monday. No matter where you are, where you have been, what has been, traffic, practice, and participate in what makes a difference; love. 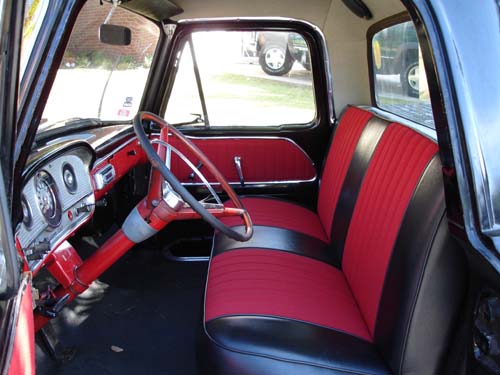