A few more ‘Befores’ before the first After..

One of the first things we had to do with that old farm house, was level it up. There’s a lot of sand at the farm and when the old farm house was brought up from old town Houston, where she’d been since the early 30’s, the footings they placed her on weren’t the best.

There wasn’t a door or a window that wasn’t cattywomped. (that’s an Arkansas word.. or an onomatopoeia… I am not sure.)

Basically nothing opened or closed. And there was one certain door, a an old timey, swingin’ one between the kitchen and dining room, that hadd been left open when the house started to go kattywomped and the whole side of that part of the house sort of rested on it… permanently open unless we found a way to straighten everything out and up.

Leveling a house is not as simple as it sounds. There’s a lot of things to thing about.

We first had to assess the situation (I love using that term ‘we’ loosely).

Neil had a plan. First we bought 17 timber jacks. And then we bought bags and bags of concrete. And then the men on the premises scooted under the house while the women in the group toted water and everybody shoveled and carted cement to the holes that were being dug in just the right places under the house. 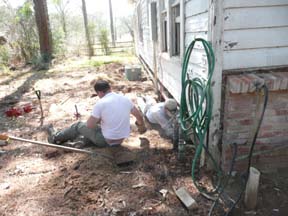 And then it got harder. 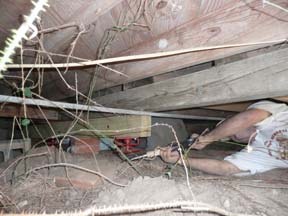 So here’s the thing. For the next 3 three weekends, Silent Bob and Brother Neil went under that house, digging holes and ladeling concrete, until a little more than 23 jacks were intalled, permanently, underneath the most important joists of that old farm house.

And then, for the next three months, slowly, the jacks were turned, each at their own pace and place, as slowly that old house got back to plumb. She would creak and groan, each weekend, old timbers shifting, the weight of that 70 year old house, repositioning itself over new foundations of concrete piers and red timber jacks.

It’s not easy to get an old house back to plumb. A house is after all,  a three dimensional thing, and leveling and plumbing means considering just about every angle from every angle in every room.

But there did come the day, that the old swingin’ door, moved slightly towards its frame and then swung freely, just as it was made to do.

We sat on the ground the last real day of jack adjustment, and each in our own thoughts, Mother, Neil, Bob and I pondered just how hard a job that it all was. To my mind, it was sheer genius on Neil’s part to have left those timber jacks in place, for if that old farm house should start to lean one little bit, it’s just a turn of the jack screw we’ll do. We won’t let her get so far that her doors and windows wont’ work.

It’s hard to escape the value of foundation. Without it, you’re pretty cattwomped.