Back in the 60’s I crushed on Captain Kirk.

My Dad, noticing, hated it and told me so. Many times.

Preteen, armed with reproductive knowledge, no empirical data, and a surprisingly healthy attitude towards sex given my Missionary Baptist background, I could hardly have been the only one enamored with the confident Captain.

Yes, he swaggered. But he saved while doing so

Yes, he talk…  ed… halt… ing.. ly… But he explored the universe for Heaven’s sake. And met alien girls who dressed in things I thought I might look good in.

Despite my Dad’s constant attempts to dissuade me, which seemed to me to not be based on any real criticism, I watched Star Trek almost every week.

And while I might have been enamored with Kirk, or at least the character, there was a substantial amount of the show plots that got folded away in the chemical recesses of the gray parts in my head. Once the TV series stopped, the movies started and in the first in 1979, Captain Kirk battled V’ger and me with a sweet, tow headed one year old son, went to see it.

I was thinking about V’ger the other day.

(That’s what happens when you get old or been married for way longer than you weren’t. The Captian Kirk’s of the world lose to technical considerations of sci fi movies.)

In the 1997 movie, the writers capitalized on a NASA program that was sending a series of deep space probes into the far reaches of our solar system. They were to travel to Saturn and Jupiter and then beyond. In truth there were only two Voyagers (1 and 2) but in the movie it was Voyager  6 that ventured into the nether regions of space, fell into a “black hole” and emerged on the other side of the galaxy eventually reaching machine homeworld. Whereupon the machines there found it crude, but treated it as one of their own kind, and sent it on a return path to its creator.
En route, in a freak accident (isn’t that always the case) it collided with an alien probe called Tan Ru. Tan Ru’s mission was to obtain and sterilize soil samples as a preclude to colonization.

You can guess what happened next.

During all this back and forth across space, V’ger had lost some of it’s original decal probably through encounters with space junk and star dust, obliterating it’s vowels between the V and g.

I think that was the part of the whole plot I liked best.

There was that moment when Kirk realized the mysterious, ominous, destructive  machine was the  very machine that earth had sent to unravel the beauty of space beyond our solar system.

It would be a little weird if I was conjuring up this memory for its sake alone and even weirder if I was considering the import of it’s philosophical message (the above statement should not indicate to you that is the case.)

It was thinking of V’ger because those probes that were sent out in the late 70’s, Voyager 1 and 2 did indeed explore all the giant planets of our outer solar system, Jupiter, Saturn, Uranus and Neptune, 48 of their moons, and the unique system of rings and magnetic fields those planets possess.

And now they have gone where nothing manmade has ever gone.

They have outstripped the Sun’s graviational pull and as of September 2013. 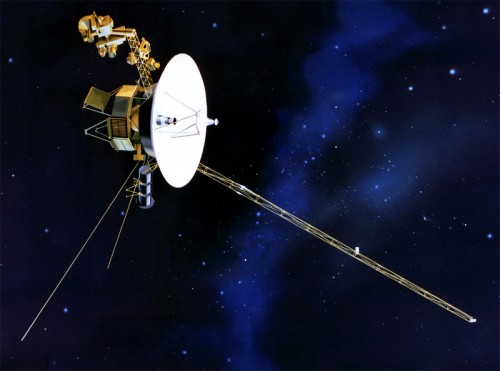 (AU is a cool measurement and may help you visualize how far out they are. An AU stands for astronomical unit and is roughly the distance from our sun to earth.)

They are way out there.

And they are still sending back information. Information that is helping us refine our ideas about the heliosphere, and plasma, and all sorts of things that in Star Trek we just warped through. (The latest is here.)

Imagination. It fuels us. Through entertainment and exploration.

What an amazing time to be alive, old and young.