We used to quilt. Okay, maybe we never really quilted much, not as a group anyway. But given that no one seemed to come up with a better name for the twelve or so of us who decided to bind ourselves together over thirty years ago, that’s the name that stuck.

We did express with enthusiastic consensus that it would be interesting to be quilters, and we did agree that as a domestic byproduct it lent just the right air of legitimacy to our group.

That and if we wanted to do it, not a one of us doubted that we couldn’t do it. The fact that we almost never did it, quilt that is, wasn’t an issue as far as we could tell.

What actually bound us together originally was purely a matter of circumstance, geography and the fact that a specific moment in time found us attending the same Southern Baptist mega church. Like sugar crystals forming on a piece of twine from over saturated water we were nucleated by our Church and spun off into our own little creation.

At least once a month for those first several years, we met regularly. As time rolled on husbands expressed mild curiosity on what held the group together for as the years rolled by the rumor was getting around that there was very little quilting going on.

I can define the Quilt Group at least in part by what we didn’t do.

It’s a fact that we have never gotten naked and gone skinny dipping. If the Ya Ya Sisterhood’s penchant for naked romping together every time there was a catastrophe or a reason for celebration convinced you this was normal female group behavior, you probably ought to read with a more discerning intellect. Not only have we never done this, but at this point in our history I can almost guarantee we never will. I am additionally almost positive that few groups of females would ever consider doing this, but who I am to say that it’s not entirely impossible.

We did go to a movie together once. Having done so in a town we were unfamiliar with, we ended up on some wrong side of said town where hoodlums lurked in the very movie theatre in which we sat. There we were all lined up in a row, popcorn in hand and about ten rows from the front, the Quilt Group watched until said hoodlums appeared at the front of the theatre and began hurling insults and fear. The Quilt Group responded in ways I couldn’t have imagined. One pulled out a pocket knife. One fisted all her money planning to hurl it at what would obviously be from that point on, completely startled hoodlums. A couple were about to dish out a few pieces of their minds. It was a tense but telling moment.

What was curious and what we would discover as time went on was that we were all alpha females.

Some might say that all women are alpha females.

In the Quilt Group it provided interesting dynamics over the years. Despite those, we have remained a functioning group and its that function that is on my heart this day. We have been together for thirty years and thirty years is a long time for a union of any kind.

What I discovered is that mostly what this Quilt Group has done is been there.

I must admit that I am a bit in awe and how much God has challenged us. If you randomly chose 12 women I wonder if they too would have been tested with life as much as the Quilt Group has.

But here’s what I know. We might not swim naked together, but when the raw, nakedness of life has sent us the hard times, when we have been exposed, sore with heartache or disappointment, they came to aid by twos or twelve, with implements of protection or money, holding and caring as one in spirit, giving from the heart, whatever was necessary.

On this Happy Monday, all you alpha females out there, young or old, find you a quilt group or be a quilt group, and stitch your life to women who will stand by you, no matter what. 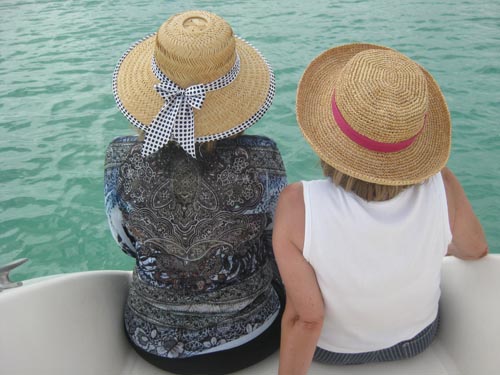