You might recall that I have mentioned previously that cow farming is all about reproduction. It’s  a place where we acknowledge what is true and right, a female’s cycle dictates life. It’s all about the girls.

Well, okay, it’s mostly about the girls, About once every 12 months or so you need a bull. Actually more correctly stated, you need merely a certain byproduct he can provide. Turns out this is way more easy to acquire than anyone might imagine.

About 26 miles from our farm is the national, no wait, maybe the international headquarters for Sexing Technologies, your one stop shop for designer cow and bull genetics. Seriously. You can go in there and tell them things like this: “I would like to order some semen from a bull that has a high carcass weight, a really big scrotum, was born in 2005, with an 85% chance of producing a female upon insemination of my cow”. They bring out the big glossy catalog and as if you know what you are doing, which probably means that most people who have thumbed through that thing do, you look at hugely muscled, scrotum-obvious bulls and pick your hunk. The stuff comes in straws.

Not having seen said straws, the second I heard the term my fertile mind created its own image of said straws and for some reason they morphed into looking distinctly like Pixy Stix.  That set me to wondering who packs them and who extricates said by product and was there an expiration date on said bovine semen straws, and back in my fertile mind, Pixy Stix took on a whole new packaging scheme for me with the end result that Pixy Stix, will forever be linked to bovine semen. 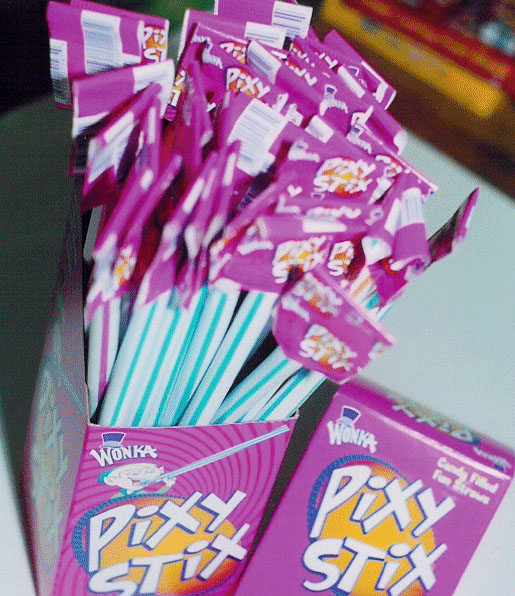 Never mind. Okay well maybe its way too late for that.

It was clearly expedient for us novices to bovine industry, not having acquired our own personal bull, for reasons to be extrapolated on below, that consideration of this option seemed like an optimum one.

“Janet, they have that sexing place just down the road,” says Brother Neil. “We could just AI the cows.” This clearly solves that bull problem I mentioned, which being good for only one purpose, that being servicing the girls, relegates the possibility to null that said bull will not breach neighboring fences to have a go at servicing other girls on other ranches. Brother Neil calls up the place “We bring them in next Monday.”

The first thing we have to do is take the girls to the vet for their well cow checkup. You know, to check things like whether or not that Charolais that escaped his fence to get into our pasture when our girls were feeling a bit like bull action might have produced little half Angus/half Frenchie babies; that and this: it’s good cow management to get all the girls on the same cycle. Yeah.  A herd of females all cycling at exactly the same time. Sweet.

According to Neil’s phone conversation with the sexing place, this first trip was going to be all about checking and inserting and hiney shots on prescribed schedules and voila!  our cows were going to have fertile eggs just waiting for a little insemination. Sounded straightforward.

Monday morning came, Silent Bob, the only one of us who had herded cattle, was on call on his cell phone and Brother Neil, Mother and me started working the girls. The idea was to get four, a particular subset of 4, into the cattle trailer parked at the head gate. It started to rain. The corral had standing water from the last week and cow cloven hoof puddled liquefying cow poo into their cow made potholes. We started them down the chute, sorting and looking for the four we needed, ear tags whirling around us amid the black hides. I stepped gingerly avoiding the most enormous piles of crap. It rained harder, the mud got thicker, and the cows got suspicious. Thirty minutes later, I had lost one shoe somewhere about a foot below normal soil level, sweat and rain poured down my face, and I no longer cared where I stepped. The cows generously continued to generate increasing layers of fresh cow poo for us to wallow in meanwhile escaping our every effort to load them.

Damn, I wanted to say. Get in the trailer, this is going to be good, hello, magic straws… yoo hoo, bull hunks. Little heifers.

Chugging out of the muck four hours later we headed for the road. I turned around and saw one black face looking directly at me and definitely, yes definitely, the ear tag said 9. Not good, definitely, not good. 9 is one of the babies. I broke the news to Brother Neil. An hour later, a conservative estimate of 40 gallons more of cow poo later, the sheer amount of poo volume staggering to me, we were headed to Sexing International, the right 4 girls in the back, their colons or the cow equivalent, certainly completely emptied.

Yeah, not so much.

I am now guessing that probably never happens.

Once directed to the AI office at the back of the complex, Neil and I squirm in unison when we see the narrow drive. Now my Brother Neil can do almost anything and do it well. Except back up a livestock trailer, he pretty much sucks at that big time. Turns out I’m not so good at the either. Silent Bob is the farm expert on trailer parking. “Who’s going to back the trailer up?” Brother Neil whispers back at me. Never bashful, I canvass the possibilities and settle on a nicely muscled young cowboy, who looks competent to me. Yeah, that’s what he looks like to me. Expressing my choice, Neil rolls his eyes and hands over the keys.

Now we might be incompetent at cattle sorting and trailer back ups, but we make up for it in unbridled interest and Nestor, as he puts on his examination gloves, agrees to a bystanders gallery of me, Mother and Brother Neil. The first girl in the shoot is a young heifer (think cow virgin equivalent, sort of) and they get her situated.

“I am going to check her reproductive system through her rectum and we will do an ultrasound to confirm she is open (think not pregnant). When did you say the Charolais bull jumped the fence? I will not be able to tell if she is open if he’s been on her less than a month.” Nestor says with the nicest Spanish accent. The young muscled cowboy pulls her tail back and Nestor requests the big gallon jug of mineral oil.

Four cows later and we are back on the road, hormones cycling in the big black bodies behind us, straws ordered, and the verdant, strawy smell of cow poo pretty much everywhere on me, smelling almost, well, pleasant and homey, part of me. Visions of Pixy Stix straws full of incredible genetic diversity, resulting in sweet faced little calves whirled in my mind.

“Janet, it was slightly embarrassing that you kept retrieving the mineral oil every time he started examining a new cow.” Brother Neil says. Just trying to be helpful I thought to myself. We girls have to stick together.